After a pause, he said, “My next is painful to confront, yet strangely empowering. I was challenged to live, by the presence of life itself. I was lying, almost lifeless, my whole life flashing in front of my eyes, having consumed ~20 pills a day over more than 2 years, a mere survivor. In between sparse moments of happiness and sorrow were regrets, for the things I could not achieve. There were people comforting me – “Hey! Congratulations, you are still alive!” All I could do was ask myself, ‘Is this enough? Is this what I was alive for?’ I knew the answer was no. I clearly wanted more, but how could I achieve it? Then a thought occurred to me- LET’S DO SOMETHING INSANE!!!!!”

I don’t like to label people ‘survivors’. A person who has won over a situation or overcome an adversity, to me, he/she is a clear winner, a lot more than a survivor.

Today, I bring you the unique story of someone who has battled with Extensively Drug Resistant (XDR) Tuberculosis and won over it. His name is Dr. Saurabh Rane and he is a part of my Real Life Heroes series. For those of you who do not know much about XDR-TB, it is a form of TB which is resistant to at least four of the core anti-TB drugs. It takes substantially longer to treat than ordinary (drug-susceptible) TB, and requires the use of second-line anti-TB drugs, which are more expensive and have more side-effects than the first-line drugs used for drug-susceptible TB. (Source: WHO) 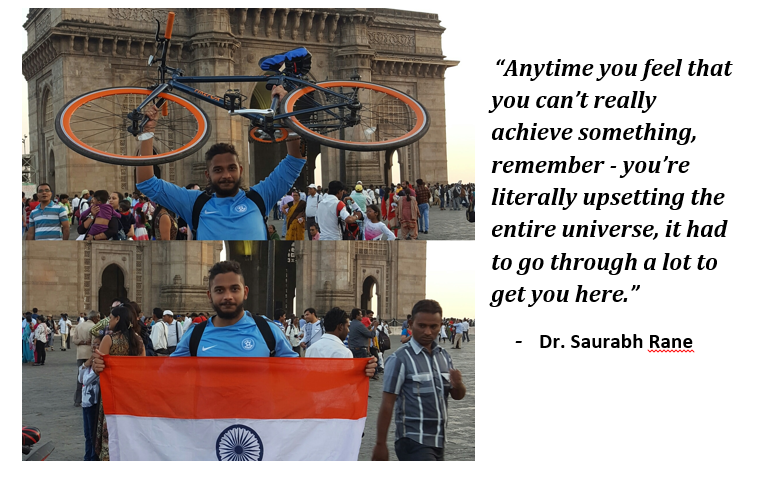 “I remember returning from the hospital one day and feeling a bit unwell. Not thinking much, I carried on, popped a pill and got back to my routine. Within a week or so, I lost my appetite, weight and the fever kept rising despite taking medicines. It took a few consultations, an x-ray and a minor surgical procedure to diagnose me with Tuberculosis. It had spread to my left lower lung and due to a delay in diagnosis and treatment, the damage was already done. I was advised to consume a few pills every day for the next 6 months and to take good care of myself. Despite the medicines, my condition did not improve substantially and eventually, a few months down the line, the fever returned with a vengeance, compounded by the terrible side effects of the potent pills. Once again, it took a long time to figure out what was wrong. We finally stumbled onto the diagnosis. I was suffering from a case of Extensively Drug Resistant Tuberculosis. The delay in diagnosis resulted in the loss of lower lobe of my other (right) lung. Now, the treatment was another 2 years with injections, multiple medicines & well-documented, serious side effects.”

The problem with strength is – it doesn’t come out naturally, it lays dormant till the time we are not pushed to the extremes, or given a ‘deadline’. It’s that very moment when you feel a sudden rush of emotions that lead to one of two choices – to ‘give up’, or ‘fight back’. Saurabh chose the latter.

“I was also battling depression at the time of my treatment, crawling through videos, blogs and articles on the internet – looking for hope. Unfortunately, there was nothing left in life after this. There were people saying, it’s great that you survived, congratulations! You are alive. Not the best thing to say to a 21-year old who wanted to run, cycle, climb and play football like others his age could. It was considered ‘impossible’ for someone with my condition to do those things. I was advised to give up on my dreams, and worse still, to make peace with not being able to achieve them. That was my wake up call. I wasn’t born to simply stay alive. I wanted to thrive, and I wasn’t going to let my circumstances pull me down for the rest of my life. I was not going to succumb to people’s opinions. It’s weird how we coin simple tasks as impossible. I can’t lose weight, it’s impossible. I can’t study that hard and crack that exam, it’s impossible . Let me tell you what’s nearly impossible- you being alive right now. The chances of you even being born are close to nil. It’s a 1 in 400 trillion probability. But, here you are. Anytime you’re feeling that you can’t really achieve something, you’re literally upsetting the universe– it had to go through a lot to get you here. When you call something impossible, you put it in the end zone of your life slate.”

Here comes the ‘next’. Defying all expectations and breaking all barriers, Saurabh decided to run a mini-marathon. He was put on strict training & diet schedule, managed to balance his work and personal life and ensured he got the required sleep.

I had read once – The Universe always falls in love with a stubborn heart. I saw it happening for the first time. After running a marathon, Saurabh was gearing up for his next challenge, returning to living. Insanity wasn’t done with him yet.

“My brother and I signed up for Stok Kangri trek. At 6100m. (20,000ft.), it is considered one of the most challenging non-technical treks in India. The snowstorms are powerful, you walk into one and come out as a different person. This was no ordinary 10km. run, nor a simple trek up pretty hills. At 20000ft., the oxygen is 40% lower than at sea level, the temperature is in the negatives and the weather isn’t always your friend. The days are hot and the nights are freezing. It’s basically a high altitude desert, with naked mountains and minimal oxygen. There are no washrooms, beds or water purifiers; food is limited and you carry a 10kg. bag-pack on you. My preparatory phase was tough, but not grueling enough to prepare me for the terrain. The day I reached Leh, I was hit with severe headache and suffered from dizziness, only to recover over time. I was fortunate to have a good trekking group with me. With days quickly passing by, our numbers were reducing rapidly, more people were opting out as we were reaching the base camp. Some had to be rushed to the hospital due to medical reasons, while others could not handle the altitude and endurance. The rest of us battled on. Finally, we got to the summit day. We started at 9 P.M. at night, and got hit by a snowstorm at 3 A.M., while midway on a 60-70 degree steep slope. While many returned, some crackheads like us waited back, hoping the storm would abate. We finally reached the summit at 9 A.M., a grueling 12 hours later. There is no feeling better than being able to breathe at that altitude and to know that you’ve achieved the impossible. It all flashed back in a fraction of a second – those pills, injections, side-effects, bedridden days and helplessness. After all I had been through, to have finally reached there, I could not stop my tears..”

“I owe my life to my mother, family, doctors, friends and mentors. Always remember – Everyone starts out ordinary. It’s your actions that determine if you  can become something bigger than that.”

(These journeys have been personally shared with me by our ‘Heroes’)

Other articles on him –

Manvi Pant is an International Contributor with Women to Watch™ Media, LLC., Catalyst (with their Men Advocating Real Change (MARC) community) and Human Capital Review – Knowledge Resources. She is the Founder of Real Life Heroes – by Manvi. Her work has been published on several online publications. Professionally, she has worked with Foundation of Organizational Research & Education (FORE School of Management, New Delhi, India), A.T. Kearney, India and presently works with Protiviti Consulting, India as Marketing & Communications Specialist. She also conducts lectures at various local universities on Business Communications. View all posts by readtoempower